Breaking into The Twilight Zone 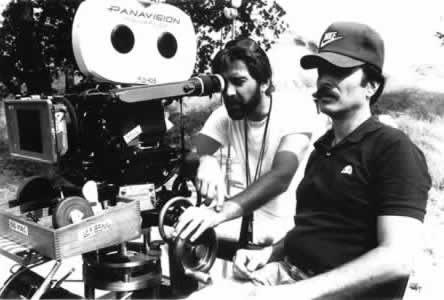 Looking back, I can see how this all came about through a fortuitous tangle of events. There were so many coincidences that if it were put to fiction, critics would hoot. So, let’s go back to the early seventies, before I was living in Los Angeles. In the summer of 1968, I shot a version of Ambrose Bierce’s Civil War short story “One of the Missing” as a small independent film. It won several awards, but that was about it at the time. Later, it would appear on PBS.

I used to go out to L.A. to soak up the “real thing” whenever I could. On one occasion, I was having dinner with a lovely lady friend of mine. She was also from Texas and had had some acting success in “the big time.” In our conversation, I told her about “One of the Missing.” That was about all I had to validate myself. Not much. But she was kind and asked to see it. Well, of course I had brought a print with me–just in case. She thought it was “terrific.” Yeah, Hollywood. Nobody criticizes you to your face. I thanked her and we parted.

Imagine my surprise when she called a couple of days later to tell me that she hadn’t gotten the film out of her mind. In fact, she had been so affected by it that she had called a friend to tell him about it. Ray Bradbury, no less! “He’s really a Bierce fan,” she allowed.

Surprised silence from me. Then: “You’re kidding …Bradbury?”

Long story short: I went to his home in Cheviot Hills with film and projector in tow. He was most gracious greeting me warmly. I set the film up and we watched it together. I kept looking at him from the light off the screen. He didn’t move. Just peering at the images through those ubiquitous horn-rimmed glasses. Uh-oh…

Finally, the film was spent. The lights were on. Bradbury sat. Mused. Then turned to me and said, “You know, I have several young film makers who study writing with me. Would you like to join?”

“It’s not formal,” he qualified. “You just write the best you can and send it to me. I’ll critique it and send it back–red pencilled of course.” 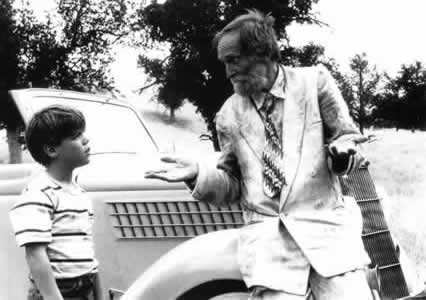 “Your Bierce is wonderful.”

Lots of work with Bradbury since, which brings us to “Strange Dimensions.” This was an idea for a film I had hatched. It would be a TZ-esque 2-hour movie with four half-hour stories. I talked to Ray about it and told him I had come up with three stories, but I was stumped on the fourth. He suggested doing one of his. I couldn’t believe it. He had a story that had the autobiographical figures of him and his aunt Neva. It was titled “The Burning Man.” I pulled out my Bradbury collections and found it. Perfect! With Ray’s guidance and approval, I adapted it to screenplay. Now I had my four.

By this time in my life, I had made a movie at CBS called “Dark Night of the Scarecrow.” It was very successful and for a few minutes I was “the spooky guy” in TV. Well, of course I submitted “Strange Dimensions.” After all, they were the TZ network. They thought it was a great idea, bought it right off and put it on he shelf. The end. Or so I thought.

I had just finished a script assignment at MGM television when I got this call from a guy who introduced himself as Phil DeGuere. He said he was executive producer of The Twilight Zone. What? 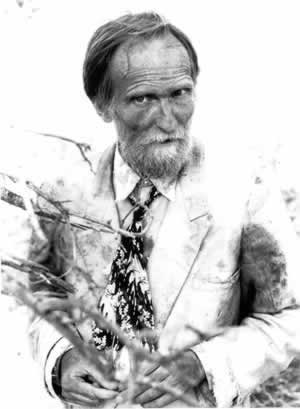 “The ‘new’ TZ,” he explained. They were going to bring it out again in the fall. Wow! But why me? “Because you’ve written a package of stories called ‘Strange Dimensions.'” Right. “There’s a story in there by Ray Bradbury called ‘The Burning Man.'”

“Yeah, but I don’t own it. Ray does. But there are three others that I do own.”

“And they are very good. But we’d like to do the Bradbury piece.”

Well, of course. Name value, you see. Now Phil tells me they contacted Ray, and he said they could use it IF … if Feigelson directed. CBS tried to talk him out of it, but he was adamant. Later, Ray told me that he’d been burned by directors screwing around with his stories. He knew I’d protect the work.

I was STUNNED. Me? …no Hollywood directing credits. None! Now out of the blue my dream was here. Knocking on the door. The brass ring, for God’s sake! What did I do? …hesitated. Back pedaled. I was terrified. Don’t you understand? I hadn’t directed in Hollywood. Nothing. Maybe I couldn’t hack it. Make a fool of myself in front of all those pros. Aiee! I told Phil I had to think about it. Had other projects to consider. 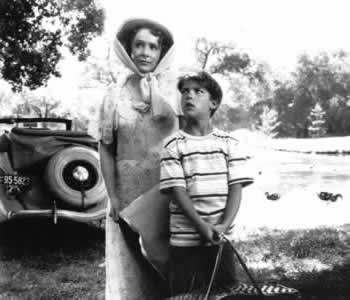 Piper Laurie and Andre Gower as Aunt Neva and Doug

It wasn’t long before Ray called. “Did you hear from The Twilight Zone people?” he inquired.

“Uh, I told him I had a lot of other things on my plate and…”

“What?!!!” he shrieked. “Are you insane? You call him back right now and tell him you’ll do it or I’ll never speak to you again!”

Bang! His phone slammed in my ear. It was that fast. More stun. More terror. What did I do, you may ask.

Well, I’m still very close to Ray, have TWO episodes of TZ with my name on them, and am a member in good standing of the Director’s Guild. And… and in the company of such worthies as Bill Friedkin, Joe Dante, Wes Craven and John Milius. Tough love, huh?

Note: J.D. Feigelson may be the only New Twilight Zone director who also worked with Rod Serling himself. Feigelson and Serling did The Other World together in 1970, a short film in the style of TZ for the United Fund.